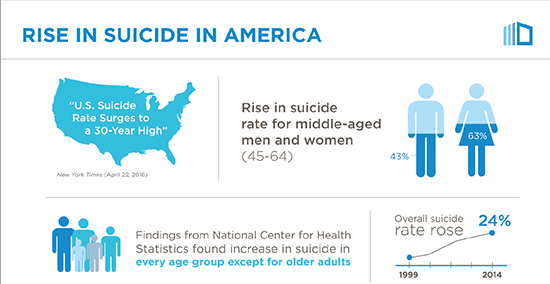 Suicide rates among Americans across all age groups have increased over the last two decades. According to a report from the United States Centers for Disease Control and Prevention (CDC), the rate of suicide has increased by 24% between 1999 and 2014. In Virginia, the Department of Health reports that the number of suicide deaths has steadily risen over the last twenty years with no indication that the issue is specific to any particular age group, gender or race.

Additionally, there is a noticeable link between suicide and recent primary care visits.

Below are resources to help assist Virginia healthcare providers in preventing suicides.

The following online courses are available for Virginia’s healthcare providers who want to learn more about suicide prevention in a clinical setting.

The following resources are available to healthcare providers for download, distribution and reuse.