The eNLC has specific licensure requirements referred to as “Uniform Licensure Requirements (ULRs).” Under the eNLC, in order to receive a license with multi-state privilege, applicants must meet all UULRs in accordance with Virginia Code § 54.1-3040.3 C. Applicants must attest the having met these requirements at the time of initial application and renewal.

The eNLC is a modern licensure solution for the 21st century, allowing for nurses living in compact states to practice in all other compact states with a single multistate license. The states that participate in the eNLC are not exactly the same as the original NLC. In states that are new to the eNLC, existing licenses did not automatically convert to multi-state privilege license and licensees must apply for a multi-state privilege license.

New states are in the process of implementing the eNLC. The Implementation Map has up-to-date membership information. 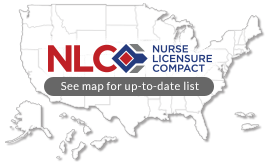 Transitioning to the eNLC

There are some important changes coming as states transition to the eNLC. This Video explains the changes and benefits for nurses, employers and educators. 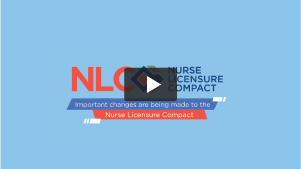 The eNLC has the same purpose and function as the original NLC with enhancements which include additional member states and uniform licensure requirements (ULRs).

Nurses with an original NLC multistate license will be grandfathered into the eNLC. New applicants residing in compact states will need to meet the 11 Uniform Licensure Requirements.

The privilege to practice in compact states requires that the nurse practice according to the laws and regulations of each state in which the nurse practices or provides care (i.e., the state in which the patient is located at the time care is rendered), either physically or electronically.  Nursing practice is not limited to patient care, and includes all nursing practice as defined by each compact state’s practice laws.  Click here to read Virginia Laws and Regulations governing the practice of Nursing.

To view any of the above PDF documents, you'll need the free Adobe Acrobat Reader.